by Amanda, Clare and Terry

A cool sunny morning with a slight breeze only,  Temperature 5° – 7°C

The Migrants have arrived!

Another very enjoyable days birding on a cool morning resulted in two more species than in March largely due to the recent influx of summer migrants; Chiffchaff, Blackcap and very recently Martins. Although no Willow Warblers were seen or heard on the Meadows one could be clearly heard from transect 12 singing on No 4 bed on Woolston Eyes.

The paths and fields are wetter than in March due to recent rainfall. The majority of birds were noted in transects 2, 3, 7 and 12.

Unfortunately no sign of either the Grey Partridge or the Stonechat from last month.

5 Grey Squirrel seen during this month’s survey, although there are plenty more about.

The Cowslips are out in transect  7 (the wild flower meadow).

Although too late to make last months survey results the increasingly rare Willow Tit has been seen regularly in transect 2, but never yet during a monthly survey.

In virtually the same location in transect 2  on Sunday 10th April a pair of Siskin were seen feeding and the first Swallow of spring was seen overflying the meadows on Monday April 11th.

A Lesser Whitethroat has been singing on the Meadows since Tuesday and was seen on Friday 15th in transect 7 (the wild flower meadow).

The Lesser Whitethroat is still reeling in the hedgerows and has been joined by his larger cousin the Common Whitethroat. 2 seen; 1 in transect 7 and one in transect 10.

A mink has been spotted during the month in Transect 2. Lets hope it doesn’t find the Willow Tits!

Members of the New Cut Heritage and Ecology group took part in a co-ordinated survey undertaken by volunteers throughout Cheshire, Lancashire, Greater Manchester and Merseyside.

The surveys aim is to estimate the current Willow Tit population within the carbon landscape and provide relevant onsite habitat information to allow for future habitat management, to hopefully increase Willow Tit numbers.

The first Willow Tit survey was undertaken along the length of the New Cut Canal on Good Friday and resulted in the successful location and sighting of one bird on the day of the survey, plus information regarding confirmed sightings of at least three additional birds seen on other occasions. 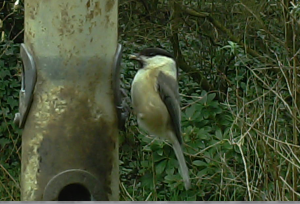 This is a terrific result bearing in mind the rapid decline in Willow Tit numbers of 87% over the last three decades and augers well for the future of this endangered species along the length of the Woolston New Cut.

This video and photos of birds seen recently adjacent to the New Cut Canal can be seen on Facebook Group Willow Tits North West along with news of other Willow Tit surveys undertaken in the North West.