Documents held by the Derbyshire Record Office, Stanton of Snelston Hall Papers, relating to the early operation of the mills at Thelwall on the River Mersey near Warrington. Documents consist largely of accounts from 1760 – 1757 and an inventory of 1797. The land was acquired in 1757 by John Stanton, Sir Ellis and Robert Cunliffe and John Craven and building began in 1758.
The site is shown on the 1871 OS map and the mills are referred to in ‘A pictorial history of the Mersey and Irwell’ by J Corbridge.. The mills were destroyed in an explosion in 1855 and never rebuilt.
The river company would not carry gunpowder at first but were carrying gunpowder in 1805 at 1/- per barrel but would not ship up to Manchester. Stanton lived at Greenfield house now Chaigelely School at Thelwall.
A letter received by Daye Barker says there were 8 mills attended by one man for 18 hours a day for 3/6d. They made 10 – 12 cwt of powder a day. The runners were 6’ 3” in diameter and weighed about 3 tons each.
Powder was established primarily to supply the slave trade between Liverpool, West Africa and the Americas. The figures for 1801 – 7 show that Stantons’s accounted for about 14% of sales. 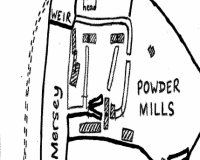 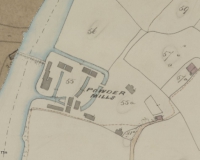