A Mersey Flat was a type of double-ended sailing barge. Traditionally, the hull was built of oak and the deck was of pitch pine. Some had a single mast, with a fore and aft rig, while others had an additional mizzen mast toward the stern. Despite having a flat bottom and curved sides they were quite stable.

The Weaver Flats tended to be larger than this.

By the end of the 19th century a great number of the sailing craft had been converted to dumb barges which were towed by horses or by steam tugs. 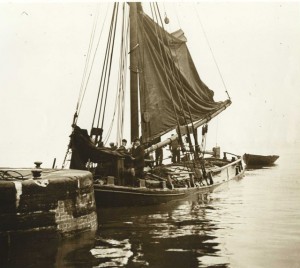 The Flat in the photo appears to be a sloop rigged craft (i.e. single triangular main sail with a smaller foresail). This was the most common type of Flat. What is slightly unusual is the number of men working her, most craft were crewed by two men and a boy.

The twin masted Flat on the left was known as a Jigger Flat, the one on the right is a single masted, sloop rigged vessel. 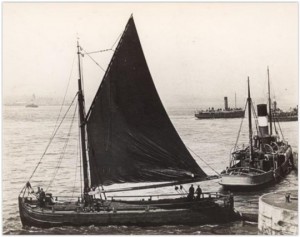 Typical Mersey Flat about 1900, possibly by the Albert Dock.

This could be a Jigger Flat as there appears to be the lower part of the stern mast in front of the helmsman. The cargo seems to be one that needs to be kept dry as the hatch covers are on and are protected with tarpaulins. 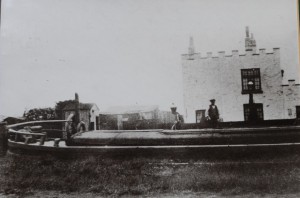