A reasonably successful and pleasant day's survey with an excellent turn out of members.

There were no new species this month during the survey, however the welcome return of 16 Redwing and 3 Teal are indicators that Winter is nigh. Redwing can be seen regularly now in the hedgerows of most fields on the Meadows.

Most of the warblers have departed for the year, with only the Cetti's Warbler encountered during the survey, although Chiffchaff were seen and heard during the month on the 7th and a male Blackcap was noted as late as the 18th.

A reasonable month for raptors again with both Common Buzzard and Sparrowhawk being seen during the survey and Kestrel encountered most days of the week. There was a report of a Barn Owl patrolling the Meadows during the early hours of the morning in the first week of the month.

As with last month Jays may be seen virtually every day. There has been no Willow Tit activity on the patch this month although a pair were seen on bird feeders at the Weir Lane end of the New Cut.

Two Kingfisher were seen during the survey in transects 1 and 12 (or the same bird twice in seperate locations).

Two Goldcrest were spotted in transect 2 on the 25th of the month.

A Common Snipe was put up by an overflying Buzzard in transect 8 on the 14th.

Magpie were seen in every transect of the survey this month.

At 9.15 am on the morning of the survey, two skeins of approximately 125 and 130 Pink-footed Geese overflew transect 2 travelling SSE. 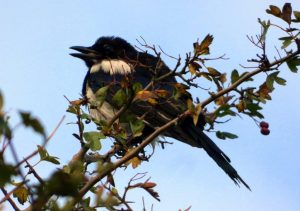 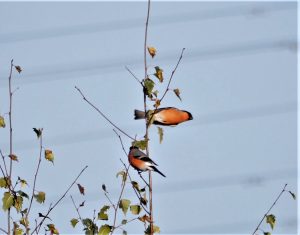 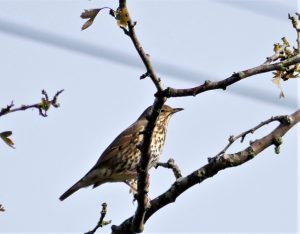 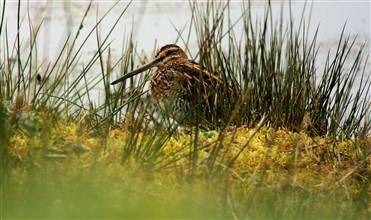 The red leaves of the Spindle Trees are currently resplendent in the hedgerows and are in full fruit. Beware! The fruits may be baked and powdered, and used to treat head lice, or mange in cattle. Both the leaves and fruit are toxic to humans - the berries have a laxative effect! 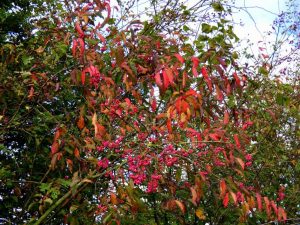 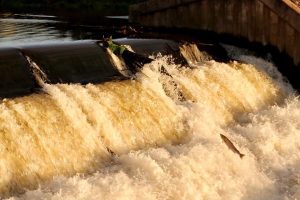